While in the city, there is no shortness of experiences that may provide inspiration — from the young adults at the catholic school across the street making baskets out of saplings for the church’s use, to the colorfully dressed, smiling woman listening to her ipod as she jogs through the park, or even the genial motorcycle rider directly in front of me as I drive down a stretch of Aurora. 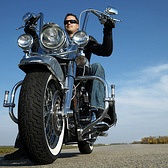 Yes, even a random gentleman on his motorcycle inspires my mind; not because of the vehicle or anything about his driving, but more the method by which he conducts himself as he scurries along the road, easily breezing past car drivers and other motorcyclists.  And its there, in what he does as he passes other motorcyclists that surprises me — he waves at them or raises his fingers in that familiar ‘peace’ sign that most anyone understands.  I found this behavior curious and at the same time endearing in its politeness because most of us in our cars are just politely being, or politely driving as the case may be.

Another thought crossed my mind, that there are many things about us that immediately instill a sense of community among those of us that share similarities.  Like parents with their baby strollers or people and their posh pooches, or even sitting at the same hairstylists’ reception area; we often regard each other kindly and even greet each other with a wave or a gentle hello, much like this driver.  I assume it is due to the fact that we are sharing a similar experience, just as the motorcyclist was as not one car driver received a greeting.  Not that there’s anything wrong with that.  It was just curious to me that he sought to connect with those other cyclists.

Then it got me thinking, “what a wonderful sense of politeness he was demonstrating to his fellow cyclists.”  Politeness, what an interesting convention, right?  Of course, not having seen this behavior before, my mind got to thinking that there is an interesting difference between “being polite” and “politely being.”  Mostly because while I was growing up I was taught to be polite, what I believed that to really mean at the time was to politely be; to exist without taking up too much space, time or energy.

Its true, that’s how I felt, but it was also how I saw others around me behaving and seemingly being.  On the other hand, politeness, is being well-mannered, civil and respectful.  However, “politely being,” is to shy away from the light or attention, hiding a part of yourself so that another could dominate conversation, the stage or in extreme cases, your life.  I no longer abide “politely being” and am now kindly polite, partly because I know myself better and am comfortable sharing who I am out in the world and with others.

And now its also a big part of what I do.  I assist others in sharing their light with the world — to have them boldly be in the world; to live fearlessly and manifest their destiny.  I love it!  It feels good to love what you do in life and to love who you are.  Today, I owe being reminded of that to the wonderfully courteous motorcycle rider with his pleasant, yet silent “hellos.”  Tomorrow, I may remind myself, who knows!

How do you remind yourself about your greatness?  What is it that you love to do in life and do you do it?  Or are you still caught up in politely being?  Time is running out, for all of us really, so step into the light.  You’ll have great company!