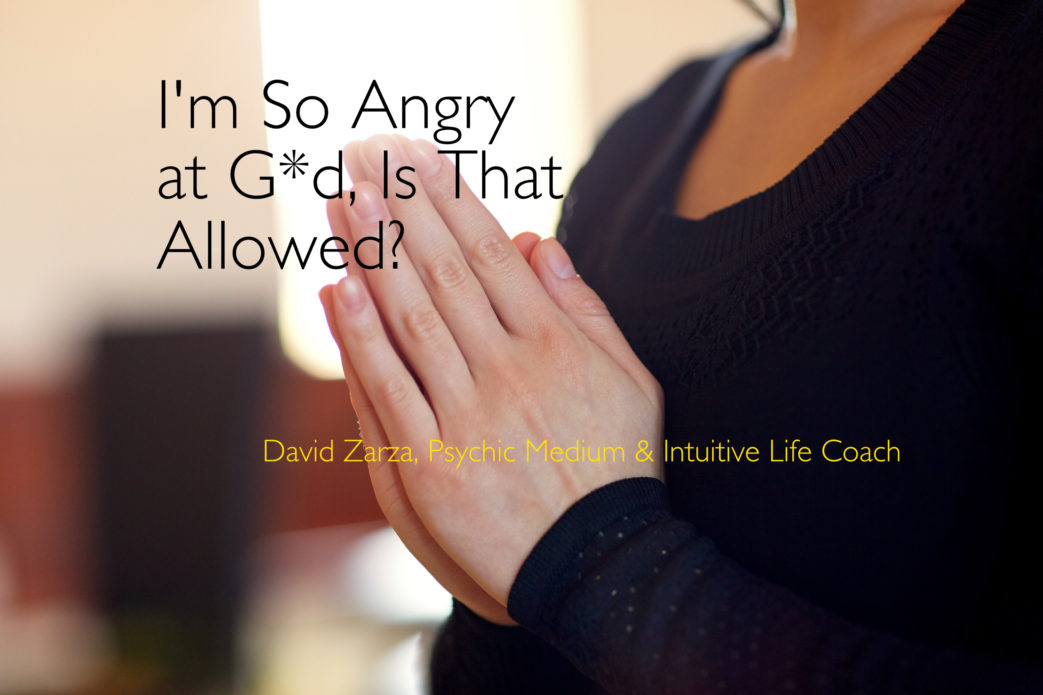 To which god are you referring to? Honestly, which one of them are you referring to? G*d is real, gods are real, there are many and many of them connect with human beings all through the Universe through all of time here. The more common one in our modern time is the Christian G*d or one similar to Him; He is real. You not only have a right to be angry at Him, but you have so many reasons too!

You need to understand G*d and the gods; what they are and how they work. First, they’re beings in higher dimensions with access to our dimension and as such they can influence through various means – via others, ideas, inspiration, energy, and most importantly, emotions! Second, they exist free of our belief in them, however our belief and feelings about them can nourish and empower them. Third, contrary to popular belief, they do answer and respond to all requests or prayers, even if the response is simple apathy from them. Fourth, they are not human, nor were they ever, but they have appeared in human form (just one of many forms they assume) throughout known time.

Having said that, the gods love our world not just because some of them played a part in creating it, but because we, human beings, are self-replenishing and surprisingly easy to take from. You know that gym membership you keep on auto withdrawal with your bank because its not that expensive and you tell yourself you will go someday or cancel it if not? Yeah, some of our connections with G*d are just like that. Mere exposure to the idea of them is enough to create a connection and an ongoing energetic tithing that doesn’t end until your life here ends. So, be aware of which of them you’ve connected with and specifically which ones you are mindlessly feeding!

Let’s get back to your anger. Why are you angry at G*d? Is it because of the crazy world we’ve built under their influence and watch? Is it because of a loss you’ve suffered because of their apathy or unwilling influence to change? Is it because you’ve tried to have a deeper relationship with them but all you get back is that they’re just not that into you? Which is it? Regardless, you’ve got a right to feel that way. But if the god I think you’re referring to is the one I’m thinking of, then He thrives on sadness, fear, stress, loneliness, despair, depression, frustration and a whole bunch of other potentially toxic emotions. You need to do something about these feelings if they fill most of your everydays.

I’d recommend you choose another god and approach this relationship with more maturity. For example, the Christian G*d is a scary one, you can thank a lot of the suffering of this world on many people’s faith in Him. Have you researched how much blood has been shed and innocence has been corrupted in His name? There’s a very similar god whose power was usurped by this one once men edited and adulterated the many stories written about them. This other god isn’t an angry vengeful one like you’ve heard, She was first!

And She was around for more than the first 200,000 years of human life on this planet and well before then on other planets. As the supreme Goddess, She ruled all the other gods even the Christian G*d. So look to her, the original creator, the only one that can actually “create” life because She will never hurt you. She is the Divine Feminine and has been called many names like Isis in Egypt, Ishtar in Babylon, Teleoinan by the Aztecs, Inanna in Sumer, Anat & Astarte by the Phoenicians, even Gaia in enduring nature belief structures. Redirect your faith, your emotions and your energy and bring some order back into this world because it is supremely off balance at the moment. Its no surprise you’re feeling angry or hurt with how things are these days.

Maybe I’ll share more about how to unplug from the non optimal gods and answer any other questions you might have too. As always, all my love and blessings to you,
-David